Save 25% on all products! Use code PAWLIDAYS on any one time purchase. Shop Now

Nearly a Quarter of Americans Say Their Zoom Fatigue is Higher Than Ever—Can Dogs Help?

We surveyed 400 Americans who have worked remotely during the pandemic to understand their experience with virtual meeting burnout, how they’re coping, and unexpected ways they’re learning to take care of their mental health and better enjoy the world of Zoom.

How Meetings Have Changed During the Pandemic
What's Contributing to Zoom Fatigue, and How Are Americans Coping?
Final Thoughts
More... 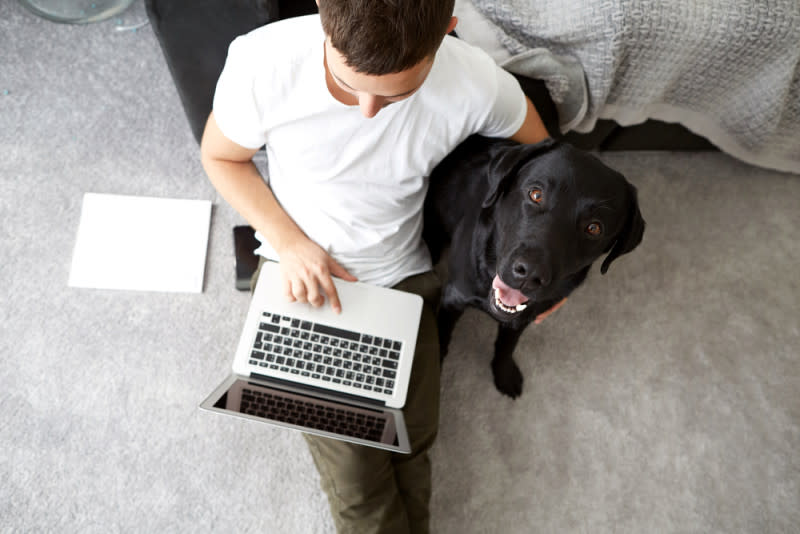 Zoom has been one of the fastest growing apps during the pandemic, seeing its number of daily meeting participants increase by 2900% within months of the outbreak of COVID-19. Zoom meetings have become a part of every-day life for many the world over, as workers transitioned to home offices in the age of quarantine and as newsrooms and popular talk shows began to use the video conferencing platform to keep productions running.

Now, more than a year and a half into the pandemic, Zoom is still a staple of many Americans’ lives. But with its pervasiveness have come consequences too. ‘Zoom fatigue’ is now an experience recognized by experts from Harvard and Stanford to Healthline.com and the Psychiatric Times, and nearly a quarter of American remote workers (23%) say their Zoom fatigue is currently higher than it’s ever been.

We surveyed 400 Americans who have worked remotely during the pandemic to understand their experience with virtual meeting burnout, how they’re coping, and unexpected ways they’re learning to take care of their mental health and better enjoy the world of Zoom.

How Meetings Have Changed During the Pandemic

Life goes on. This has been the modus operandi for just about every company and business during the pandemic. Despite social distancing regulations, work teams still had to find a way to move forward in the age of quarantine. Enter: Zoom.

Zoom has allowed companies to keep their team members connected and on the same page through video conferences, which have taken the place of the typical work meeting during the pandemic. Now, instead of sitting around a conference table, remote workers are operating from their home office, using a webcam and microphone to engage in discussions with live video feeds of their coworkers.

However, it seems the ease of technology has had a surprising result: 55% of American remote workers say they have more meetings now than they did in person, with 35% participating in a virtual meeting multiple times a week and 17% participating in a meeting multiple times a day. Of those workers, 35% only have 30 minutes or less between meetings. Considering the majority of meetings seem to last anywhere from 30 minutes to 1 hour, with 15% exceeding the 1 hour mark, that makes for a busy work schedule! 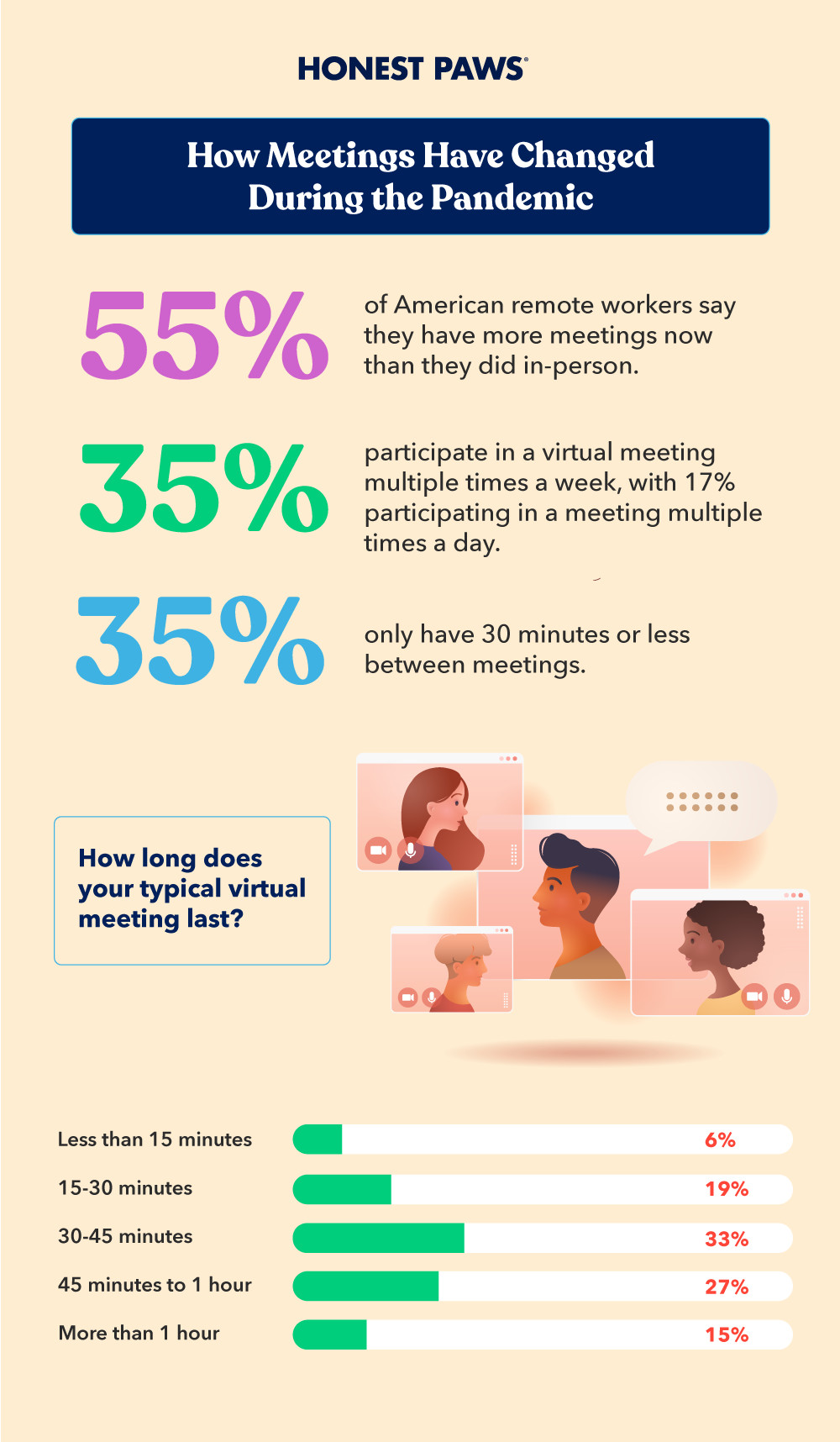 It's no surprise then that when asked how they would rate their current level of Zoom fatigue, 29% of survey respondents say they feel moderately fatigued and 23% say they feel extremely fatigued. 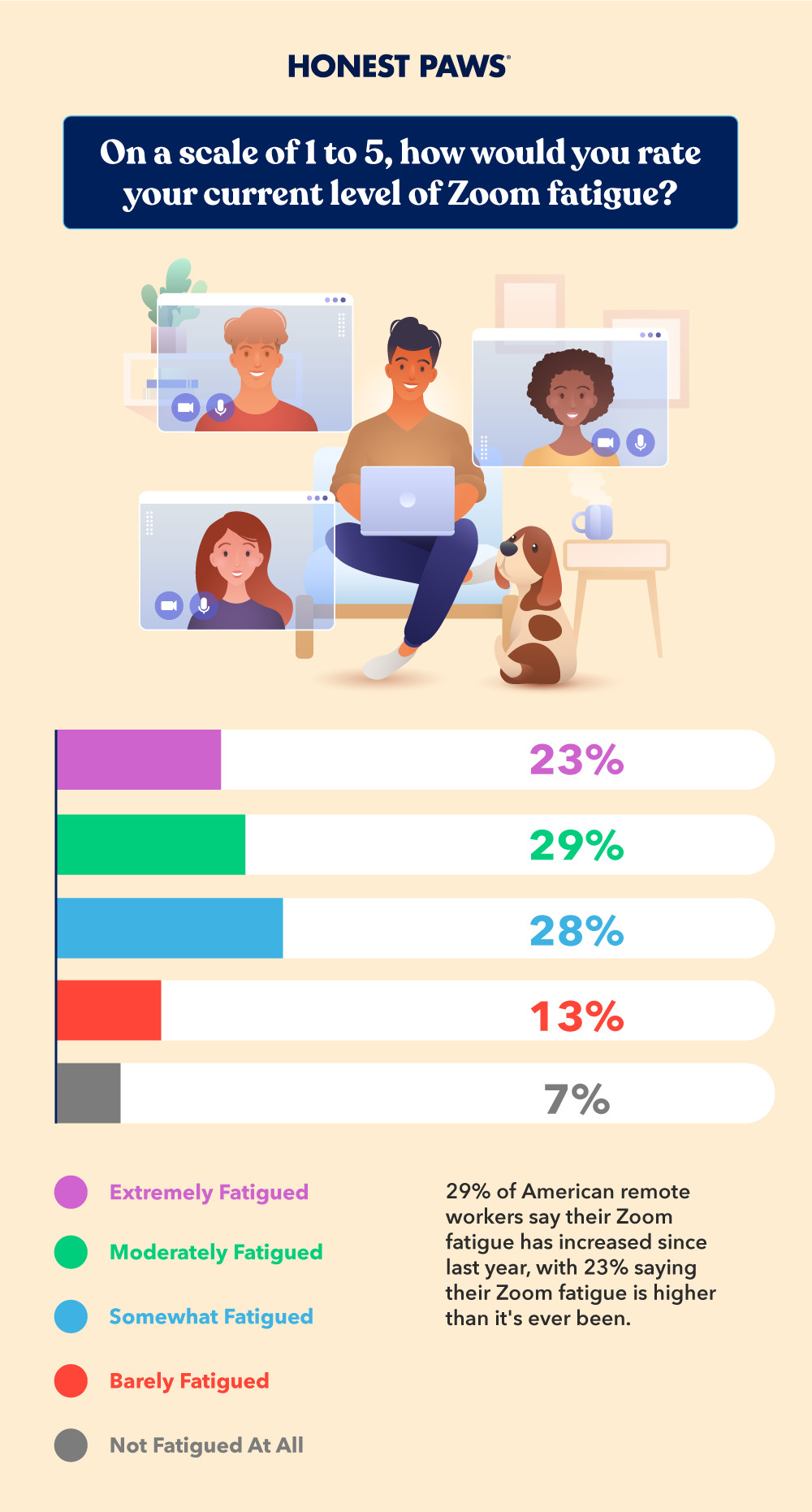 What's Contributing to Zoom Fatigue, and How Are Americans Coping?

Zoom fatigue is a very real experience. According to Google Trends, the search term exploded in growth in April 2020 and saw another spike in March 2021. Globally, the term has a search volume of 4,500 queries a month, according to SEO platform ahrefs.com. Stanford University has even spearheaded a study to measure the level of exhaustion and fatigue people are experiencing in the workplace as a result of videoconferencing apps like Zoom.

But what exactly causes Zoom fatigue to begin with? According to 56% of Americans, meetings that run too long are the main culprit. This can particularly be an issue in light of how mentally and emotionally draining many find virtual meetings to be.

According to experts, the nature of video chats requires that we work harder to process non-verbal cues than we would in a normal face-to-face conversation. These cues include components such as facial expressions, body language, and even the tone of a speaker's voice. This hyper-focus unfortunately consumes a lot of energy.

However, there's also the unnatural way in which remote workers are forced to hold conversations during virtual meetings: by staring at the speaker's face nonstop from such a small distance. In an office setting, a worker wouldn't normally stand so close to a co-worker and stare at them for the entire time that they're speaking. According to Stanford University, this excessive amount of close-up eye contact combined with the unnatural proximity of another's face puts our brain in a hyper-aroused state and causes it to interpret the situation as an intense one that may lead to conflict.

Indeed, 35% of Americans say the increased amount of eye contact during meetings is one of the biggest reasons behind their Zoom fatigue, along with having to stare at a screen for long periods of time (52%).

So how are Americans coping with their virtual meeting burnout? The ways are many: 49% say they take an exercise break, 47% opt to pause for lunch, and 43% say they simply turn off their video during Zoom meetings.

There's also another way Americans are coping however: by dodging Zoom meetings altogether! In fact, 75% of Americans have declined attending a virtual meeting simply because they didn't feel like attending.

Among those who skip out on Zoom meetings in the name of mental health, the most popular excuses used (even though they're not true) are: internet problems (32%), schedule conflicts (28%), and sick days (27%). 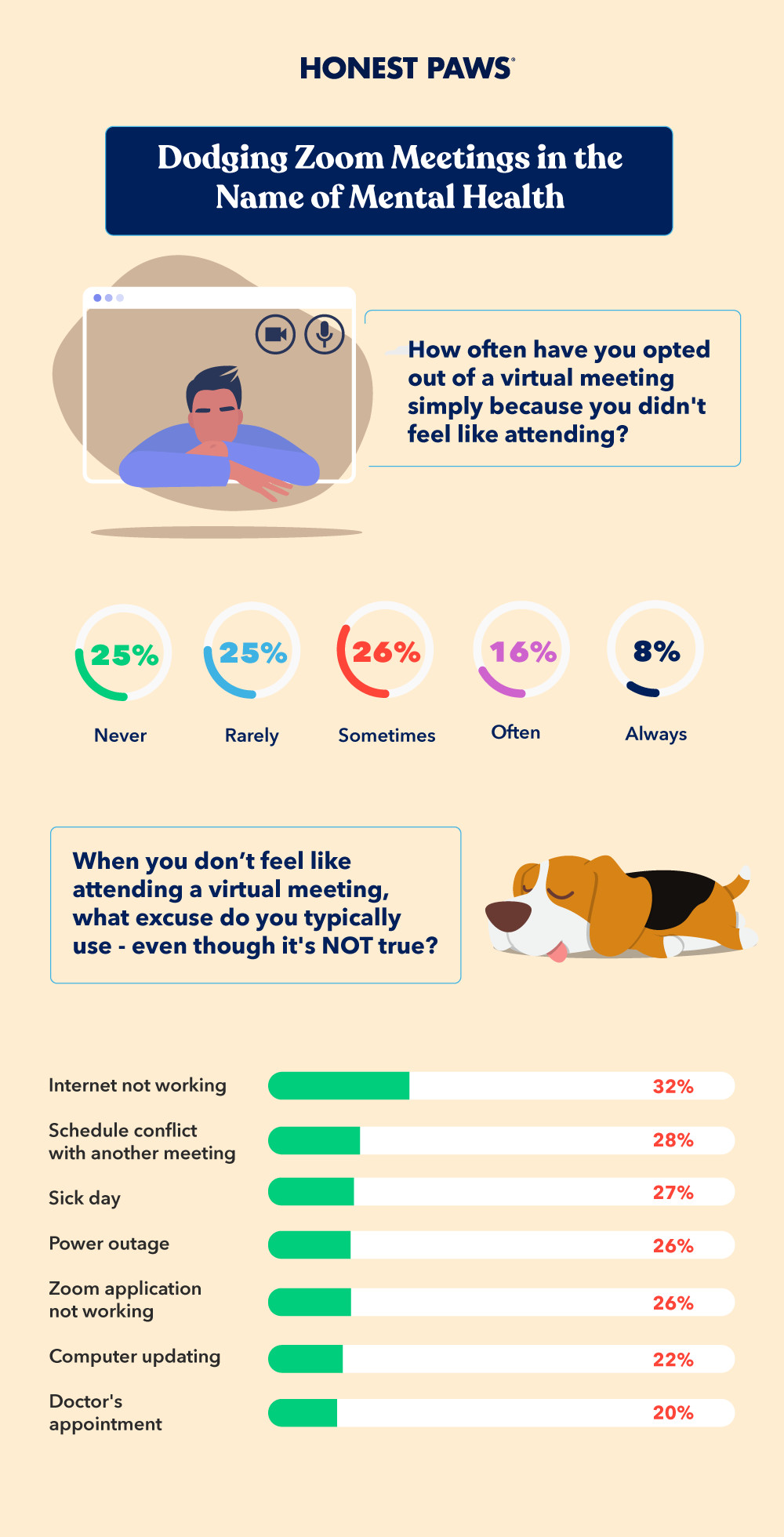 However, it's not all gloom and doom for Zoom meetings. In fact, there are surprising ways American remote workers are enjoying a relief from stress during their video conferences. The biggest source of stress relief? Dogs!

According to our survey 48% of respondents say that when a co-worker's dog makes an unexpected appearance, it lessens their work-related stress during a Zoom meeting, and 51% say that a dog's appearance goes so far as to make a Zoom meeting more enjoyable for them, beating out meetings that last less than 15 minutes (48%) and funny stories/jokes (34%).

So what is it about the mere sight of a dog that helps us feel a little bit lighter? Studies have long shown that dogs increase our levels of oxytocin, a neurotransmitter that calms our nervous system while reducing anxiety. In fact, a research study published in 2015 reported that simply gazing into a dog's eyes could cause a tremendous spike in a person's oxytocin's levels—a 300% increase, to be exact. No wonder remote workers enjoy seeing their canine colleagues in the Zoom video grid! Beyond this, another study showed that pets in the workplace may lower cortisol levels, and others have reported increased productivity and improved social interactions as a result of office pets, proving there are many benefits to be had when mixing business with pups.

Although companies and businesses have slowly begun to re-open and many workers have now returned to the office, a large number of Americans still remain based out of their home offices, relying on apps like Zoom and Slack to stay in touch with co-workers. For the time being, it seems remote work is here to stay, and for the most part, Americans seem to prefer that option, especially remote workers with pets at home.

However, so long as Zoom remains a part of the American home-based workforce, those who rely on its services will need to implement strategies to combat fatigue and burnout, whether it means switching to phone calls and emails, building in breaks between meetings, opting out of the occasional conference if needed, and yes: asking that one co-worker to give their four-legged friend some camera time for a much-needed serotonin boost.

This online survey was administered via Pollfish and ran on August 11, 2021, with no less than 400 respondents.