The Most Popular Dog Breed in Every State

We wanted to know which dog breeds are popular in the U.S. so we investigated the most searched pups by state. Our findings might surprise you!

The U.S. is a nation of dog lovers, and even more so during the pandemic, when the comfort of a slobbery canine kiss or a long walk with man’s best friend helped many Americans endure months of social distancing and working from home. Many of us hold a special place in our hearts for certain breeds, based on looks, temperament, and even care requirements.

For some, the watchful Great Pyrenees makes for the best family guardian, while others delight in the mischievous Shih Tzu. Pet lovers looking for a loyal companion may enjoy the Beagle’s preference for company, and athletes may find the perfect training partner in the Labrador Retriever. Whether we’re looking for spirited playmates, devoted lap dogs, or hardworking herders, there’s a dog breed for everyone. But which breeds are the most popular, and where? 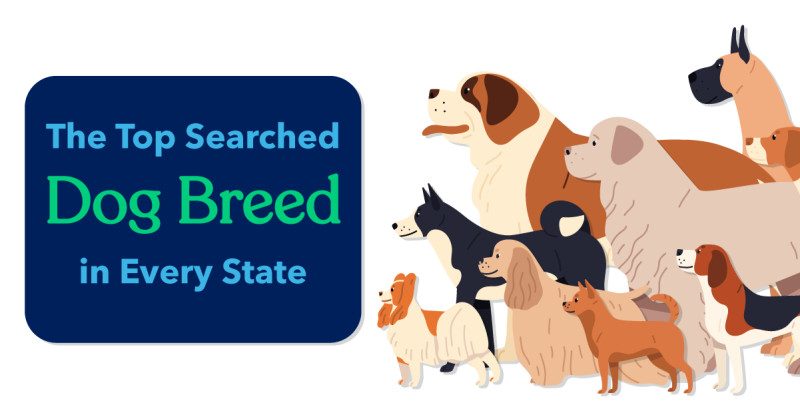 To find out, we turned to online search interest. Using a list of 40 notable dog breeds across the seven major groups—Working, Herding, Sporting, Non-Sporting, Hound, Terrier, and Toy—we explored Google search trends over the last 12 months for every state and the District of Columbia. We determined clear winners for the most searched dog breed in each state, the most searched dog breed overall, and how many states searched that breed the most. Read on to see what breed takes “Best in Search” in your state!

The Top Searched Dog Breed in Every State 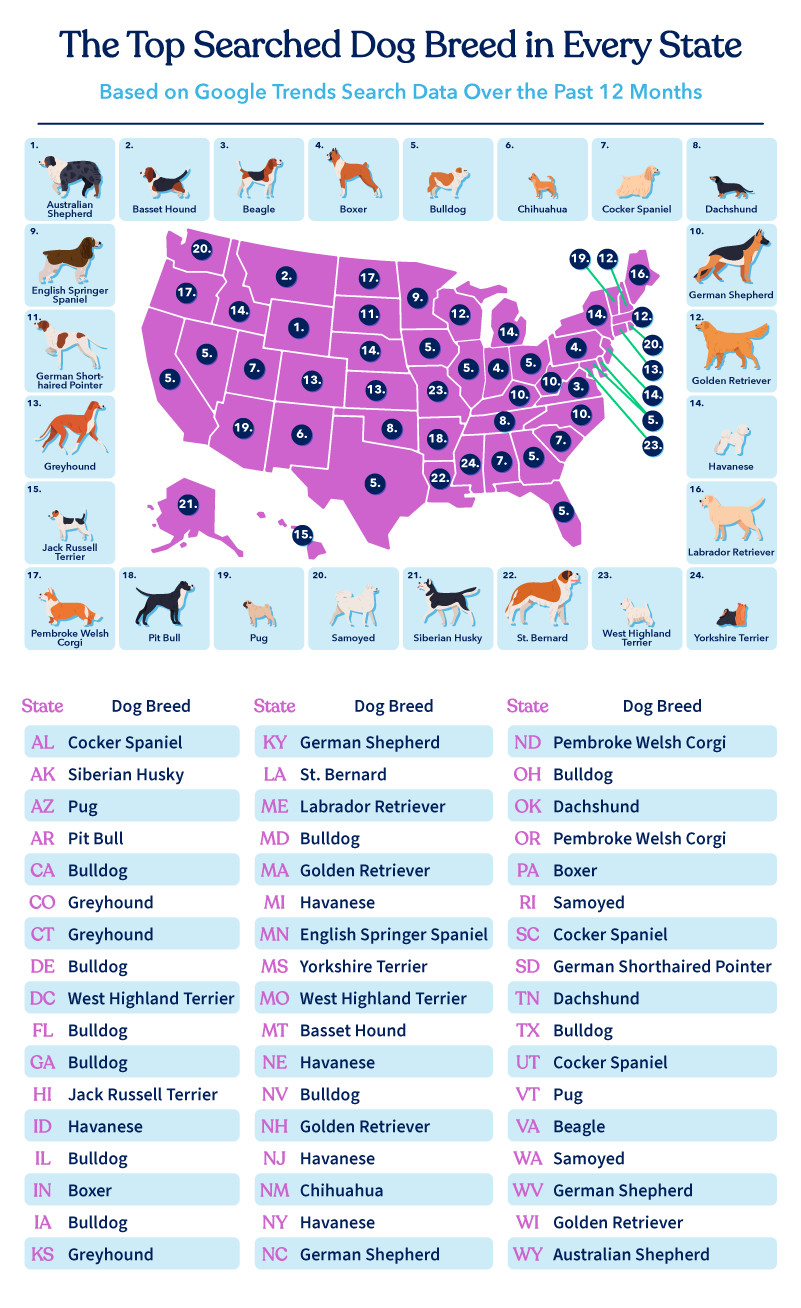 We developed a list of 40 popular dog breeds, but only 24 of those breeds ranked first in at least one U.S. state. Golden Retrievers, popular with families and known for their gleaming coats, friendly faces, and eager-to-please attitudes, were the favorite in Wisconsin, Massachusetts, and New Hampshire, where hunting and fishing are popular pastimes. St. Bernards, gentle giants with extraordinary strength and power, stood strong against hurricane season in Louisiana. Kansans sprinted to the finish line with their first pick, the Greyhound, while Alaskans endured the frozen north with the Siberian Husky. In North Dakota and Oregon, herds were kept in check by the Pembroke Welsh Corgi, while Arkansans showed some much needed love to the Pitbull. And in Tennessee and Oklahoma, courage mattered more than size for their number one pick—the Dachshund.

Among the 16 breeds that did not rank anywhere in the U.S., there were some surprises. While French Bulldogs were recently named the number two dog in the U.S. by the American Kennel Club, the breed didn’t rank first in search interest in any of the 50 states or D.C. Standard Poodles, with their low-allergen coats and unparalleled intelligence, were also left out of the running for top dog—perhaps because of the popularity of “doodles,” the result of cross-breeding between Poodles and breeds like Golden Retrievers, Labrador Retrievers, and even Bernese Mountain Dogs.

It’s worth noting that the breeds with no significant ranking, including Great Danes, Dalmatians, and Pomeranians, among others, cover a range of prices for purebred dogs, so we can’t draw any cost-related conclusions about why these breeds aren’t highly searched. Pet adoption is a pivotal decision, and the variety in our results on a state-by-state basis reflect how personal selecting the right breed for you and your family can be. 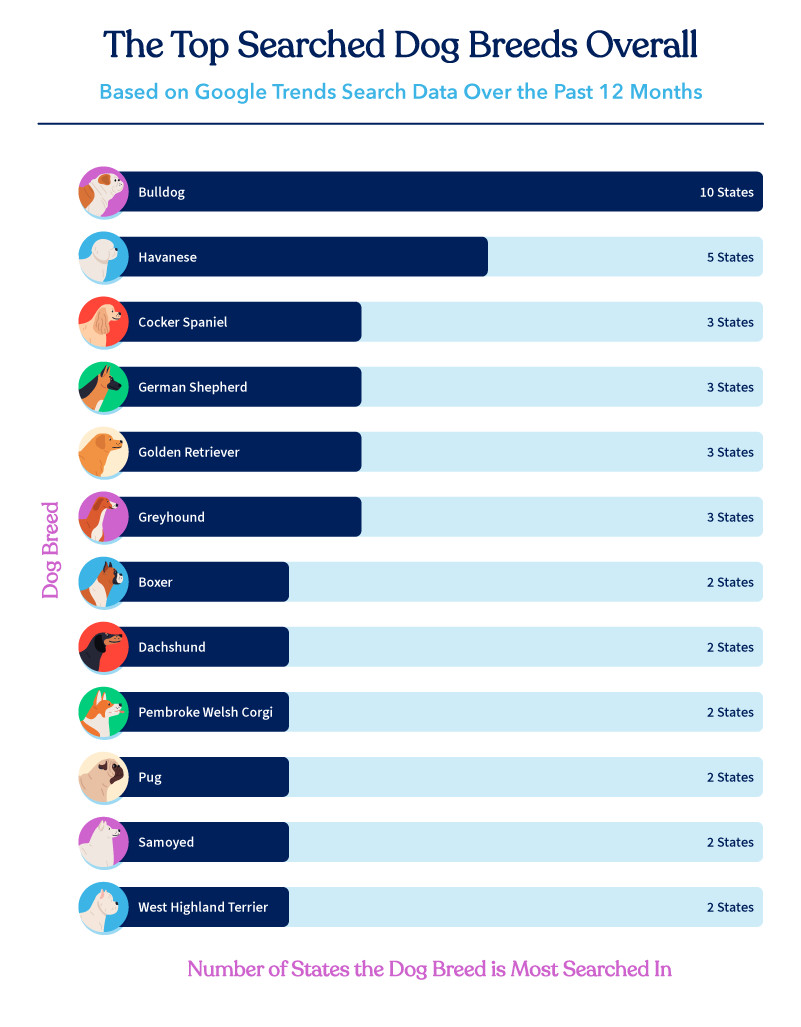 When it comes to America’s top searched dogs, each of the seven breed groups was represented in our results. Taking home the “Best in Search” blue ribbon was the Bulldog, ranking first in ten states. Despite serious over-breeding and subsequent health issues, the tenacious Bulldog endures and has long been among the most popular breeds in the U.S. and abroad.

The sociable and spunky Havanese, popular with big city dwellers, ranked first in five states, including New York and New Jersey. Three Working group breeds—the Cocker Spaniel, the German Shepherd, and the Golden Retriever—along with the speedy Greyhound, were number one in three states a piece. Six other breeds on our list, including the Samoyed, the Pug, and the Pembroke Welsh Corgi, ranked first in two states each.

If search popularity isn’t enough to help you determine which dog breed is best for you, look to the stars! Some of the most beloved icons of pop culture have been furry and four-legged, and sometimes, their famous owners demonstrate unwavering breed loyalty.

Oprah’s flock of Springer and Cocker Spaniels have been featured on the cover of O Magazine, while Chrissy Teigen and John Legend are among the country’s biggest Bulldog fans. Breed favoritism occurs in the White House, where First Family dogs like Bo and Sunny Obama, two Portuguese Water Dogs, and Champ and Major Biden, both German Shepherds, stole the public’s hearts. And let’s not forget Queen Elizabeth II’s love of the Pembroke Welsh Corgi—she is estimated to have kept over 30 Corgis over the course of her reign.

So, what are you waiting for? Start your own search today for a new best friend! And if you’re ready to bring home a canine companion of your own, Honest Paws has you both covered with its selection of canine wellness products designed to keep your pet calm and cared for!