How Quickly Pet Influencers Can Pay Off Your Mortgage

Have you ever heard of Jiffpom? This pet influencer could pay off your mortgage with 7 posts on Instagram. Find out just how rich Instagram pets are today! 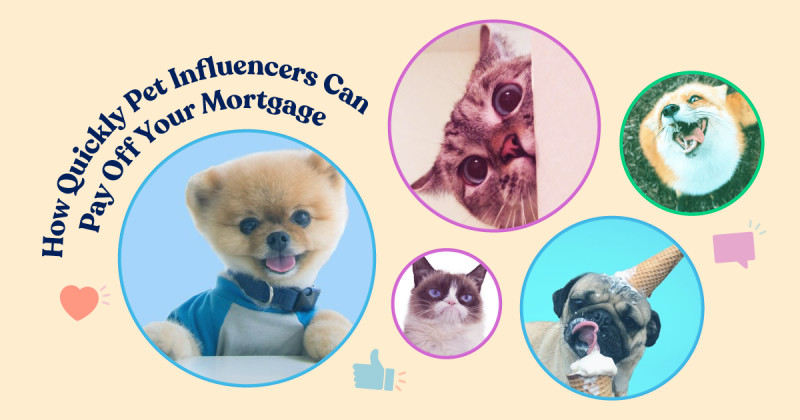 For most people, buying a home is likely the biggest purchase they’ll ever make and requires years of concentrated saving just to afford the down payment. Then, after the initial gouge, they have a mortgage looming over them for thirty years or more. Couple that with the current housing market, where homes can easily sell for tens of thousands above the asking price, and it's easy to see why it’s so hard for millennials to pay off home sweet home.

But there is one group of socialites that doesn’t bat an eye or wag a tail at the increasingly unaffordable home prices of today—animal influencers on Instagram.

What started as a few silly cat videos being swapped between Facebook friends has boomed into a fully fledged industry where animal ‘talent’ is scouted out, molded for ultimate cuteness, and paraded in front of millions of followers for absolute gobs of money.

These dogs, cats, and miscellaneous furry friends rake in more cash than many well-educated Americans just for being adorable and donning pint-sized outfits. But which ones are on top of the dogpile? And how quickly could they pay off your mortgage?

To find out, we looked at the top 50 animal influencers on Instagram and compared their earnings to mortgage rates across the country and in every state.

First we determined how quickly each one of the 50 top-earning animal influencers on Instagram can pay off your mortgage. We used Influencer Marketing Hub’s Instagram Earnings Calculator to discover each pet’s average earnings per post, then compared it to the average mortgage principal in the United States, according to Experian. This resulted in the number of posts required for each furry star to pay off the average U.S. mortgage.

We also calculated the average per-post earnings of all 50 famous fur babies and compared it to Experian’s figure for the average mortgage principal in every state. That gave us the average number of posts it would take a successful animal influencer to scoop up a home in your state like a clump of kitty litter.

How Quickly Each Animal Influencer Can Pay Off the Average Mortgage in the U.S.

So who’s top dog when it comes to Instagram riches? That crown is firmly held by America’s favorite poof, Jiffpom. His owners keep every hair pawfectly in place and he looks precious in every outfit, so it's understandable why America goes ga-ga over his sweet charm.

If he was so inclined, Jiffpom could harness the power of his 10 million followers to pay off the average U.S. mortgage in just seven posts. A photo here, an owner-assisted selfie there, and Jiffpom is calling the shots in your home.

The second richest pet influencer on Instagram is Nala Cat, a wide-eyed gem that makes more than $11,500 per post. That’s right, she could be clawing up the deed to your home in as little as 17 posts on Instagram. It appears to be true that cats always land on their feet, even on social media.

With the likes of Doug the Pug, Smoothie the Cat, Tuna, and Mr. White joining the top 10 animal influencers that could pay off your mortgage in the fewest posts, it’s raining cats, dogs, and cash on Instagram. But these typical companion animals aren’t the only game in town. Uncommon and even exotic pets like Juniper the Fox—the fourth richest animal influencer on the platform—are also taking Instagram by storm.

Even Jill the Squirrel, who sits a bit further down the list, can pay off the average U.S. mortgage in just 66 posts. We can't say we aren’t jealous of that kind of spending power, but after enduring Hurricane Isaac and finding rescue, we’d say the 8-year-old backyard beauty deserves it. Just look at the way she hugs her tiny teddy bear!

It’s clear that the cuddliest creatures of Instagram can pack a serious punch with their internet fame. But how quickly could they usurp the best spot on the couch in your own living room?

Keep reading to find out how many posts it would take the top 50 animal influencers on Instagram to pay off the average mortgage in your state! 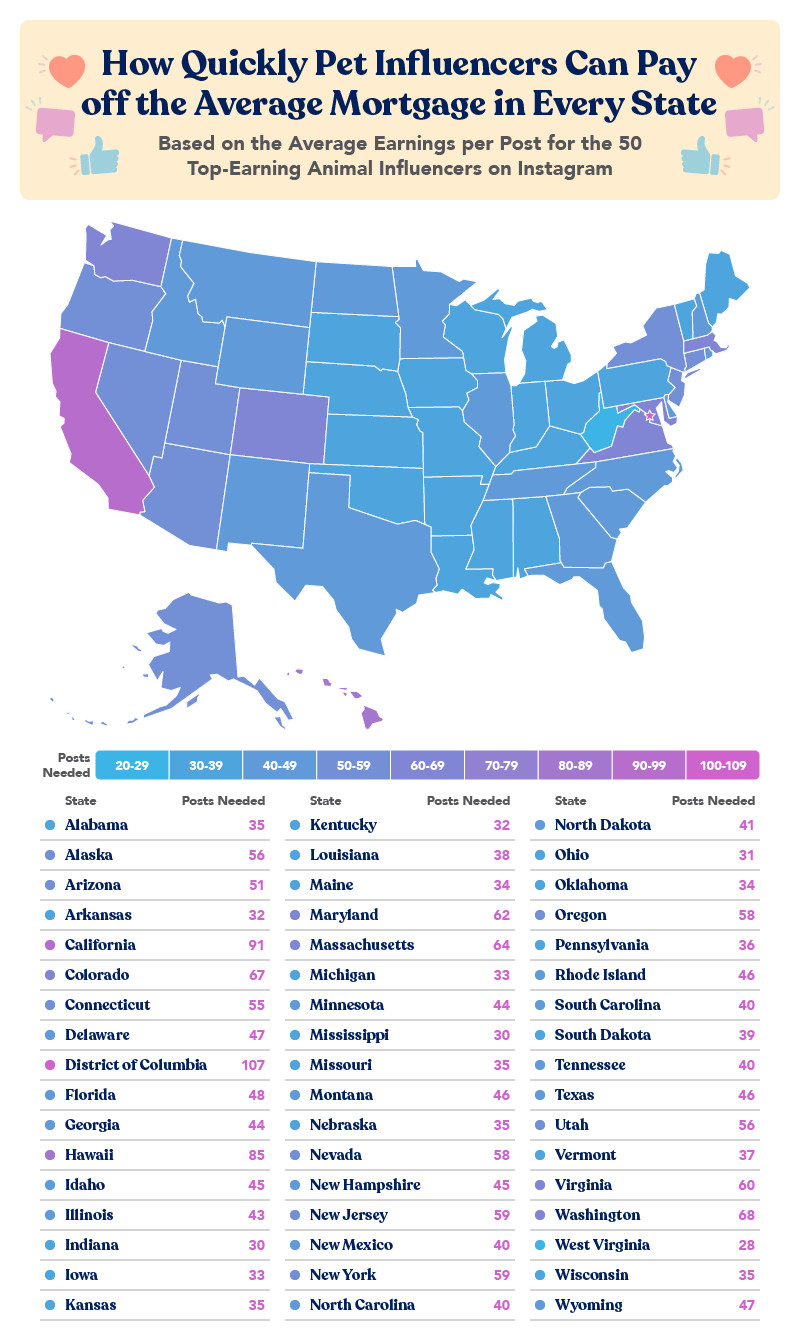 If pets ever do start buying real estate, we have a feeling they will flock to West Virginia, where they can pay off their mortgage in the shortest amount of time (27 posts). Mississippi, Indiana, and Ohio are great places to consider as well. Not only are these states full of natural splendor, but it takes just 30 to 31 posts to pay off their average mortgages.

At 103 posts, the District of Columbia is the worst state for fluffy Instagram influencers looking to pay off a mortgage. California is a poor choice, too. Yes, there is sunshine, palm trees, and even opportunity for big TV movie deals like Grumpy Cat’s Worst Christmas Ever, but it takes a whopping 91 posts to pay off the average mortgage. Just ask Papi or Chloe from Beverly Hills Chihuahua.

Above we compiled the full list of the top 50 pet influencers according to earnings per post. Jiffpom is a true sensation, racking up 10 million followers and making $27,000 per post—equivalent to the annual salary for a full-time job that pays $13 per hour.

Heading up the rear of the pack, we love to see exotic pets like raccoons, marmosets, ponies, hedgehogs, pigs, and chinchillas developing their digital brand and proving that conventional cuteness is only the beginning.

For example, we love Boris the Chameleon. He may be number 50 on the list with just under 50,000 followers and making only $334 per post, but he’s out there changing colors, wearing little daisy hats, and sharing what he loves with the world. So what if it takes him 577 posts to pay off the average mortgage in the U.S.?

While not every pet can top the charts of furry fame, every pet is number one in their owners’ eyes and perfect in every way. Maybe this list inspired you and your animal companion to shoot for stardom on Instagram. If so, Honest Paws is here to supply pet care products to keep your pal calm in front of the camera and mobile for their next big stunt.