Birth Rates Have Reached an All-Time Low During the Pandemic—Are Pets the New Baby?

Birth rates reached an all-time low during the pandemic. We surveyed 400 Millennial women who don't plan to have children to explore the reasons why they're opting out of motherhood, and how pets may be standing in for kids. 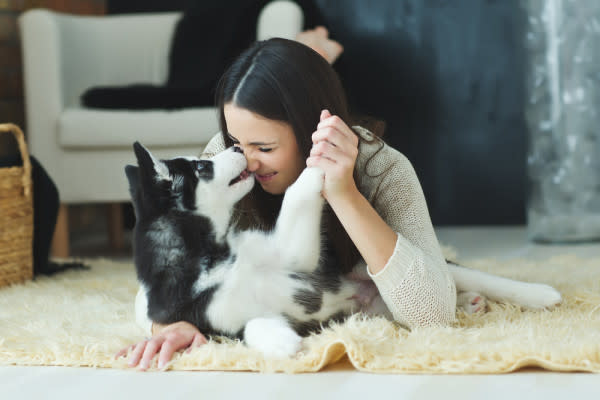 While many believed the COVID-19 pandemic would fuel a 'baby boom' as couples found themselves spending more time together under lockdown, the opposite turned out to be true. In fact, according to data published by the CDC, birth rates in the U.S. reached a record low in 2020, showing a 4% decline in the number of U.S. births from the year prior. This figure is not only double the average yearly decline since 2014, but represents the lowest number of births since 1979.

However, this downward trend in births was noticeable even before the pandemic. Women, especially Millennial women, have been increasingly delaying motherhood to pursue careers and continuing education. Others have married later in life, or have put motherhood aside temporarily in the face of economic uncertainty.

There are also Millennial women who have opted out of motherhood altogether. We surveyed 400 of these women to explore their views on motherhood, children, and how domestic pets like dogs and cats may be the new ‘stand-in’ for children for millions of Millennial women around the U.S.

The only thing that never changes is change itself.

What might’ve constituted as the ‘American dream’ only decades ago has evolved to mean different things to different people, especially among the Millennial generation, which is made up of those born between 1981 and 1996.

Millennials have bucked against many milestones long seen as societal norms or traditions, such as purchasing a home and getting married.

Millennials have also approached the subject of parenthood differently, with many delaying it until later in life while others eschew it altogether.

We surveyed 400 women who do not plan to have children (neither biologically nor through adoption) to explore the top reasons behind their choice.

The most popular reason that Millennial women cited for opting out of motherhood was simply a lack of desire to raise children, according to 46% of survey respondents.

The second most popular reason was nothing short of an acknowledgement of just how expensive raising a child truly is (nearly a quarter of a million, according to the USDA). Older Millennials lived through the 2008 recession, and have struggled financially under the weight of crippling student loan debts, the rising costs of living, and the scarcity of good-paying jobs. In addition to this, they then had to experience the economic strain brought on by the pandemic.

It’s no wonder then that many Millennial women are reconsidering their life plans from a financial standpoint. In fact, 42% of survey respondents say the COVID-19 pandemic has impacted their decision about parenthood, causing them to decide they don’t want children, no doubt a reflection of today’s economic uncertainty, limited access to healthcare, increased stress levels due to the pandemic, and concerns about the current state of the world. 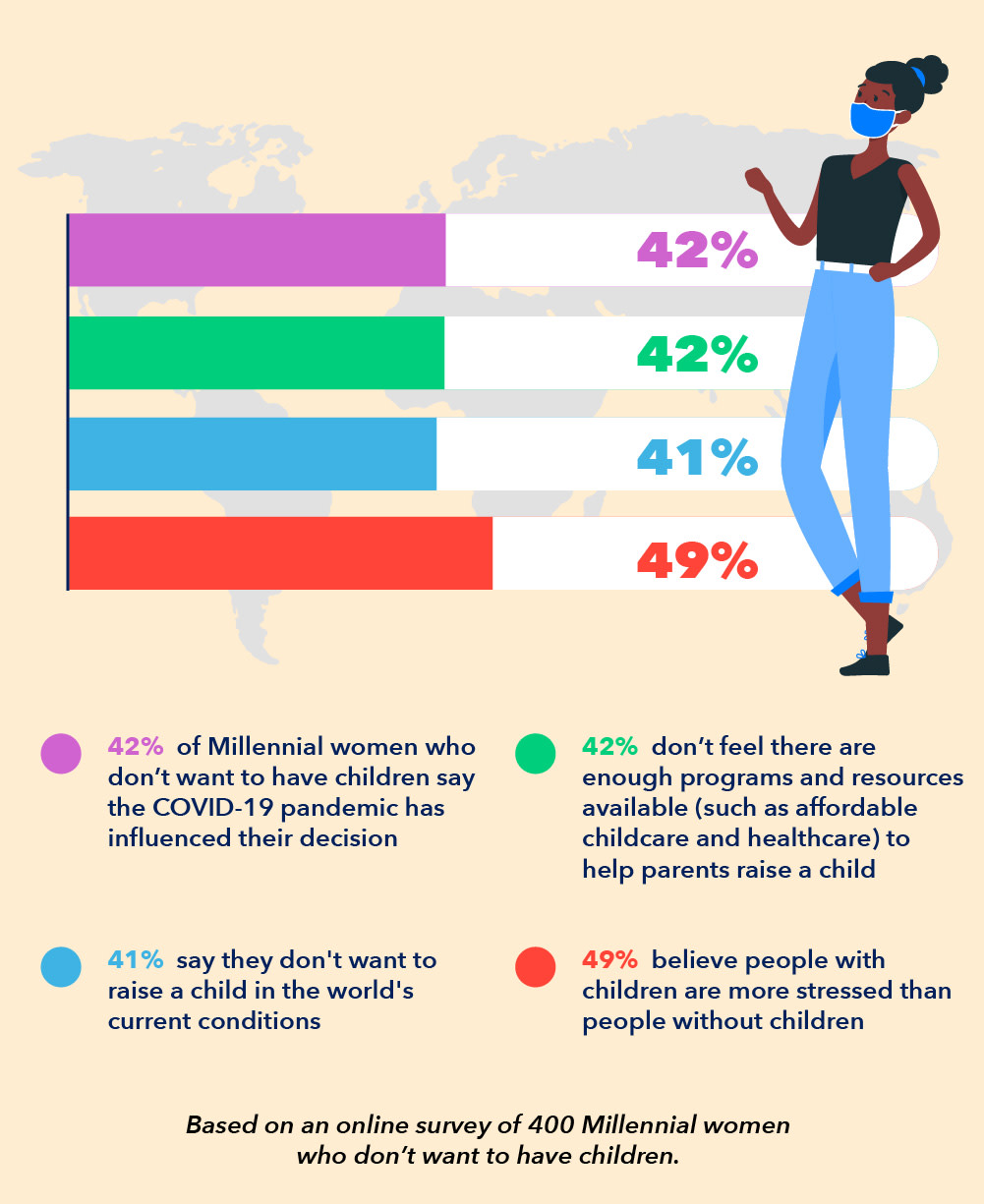 For other Millennial women who have chosen a childfree life, their career, education, and relationships are what they prefer to prioritize, with nearly a third of survey respondents (32%) reporting they’re focusing on building their professional life or pursuing education instead and with 29% reporting their focus on building a life with their romantic partner.

Given the growing opportunities available to women when compared to just a hundred years ago, it’s no surprise that Millennial women are finding new paths toward fulfillment that better fit into the lifestyle they’ve envisioned for themselves.

We focused specifically on what fulfillment looked like to these women and asked about the ways that they’re building a life that they find meaningful and rewarding.

Other Paths to a Fulfilling Life 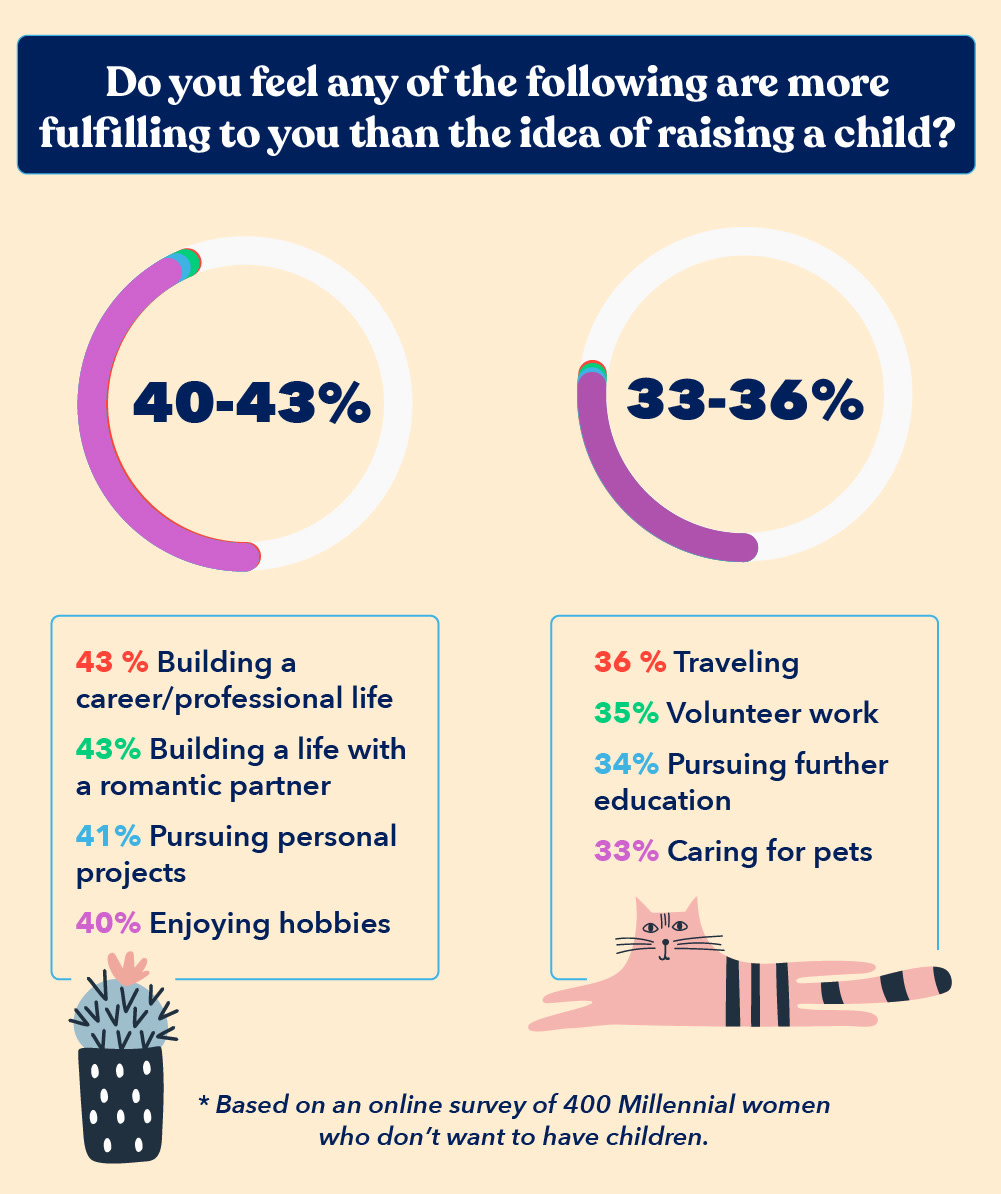 As our survey results show, Millennial women who have chosen a childfree life are building rich lives in a multitude of ways, with 43% of survey respondents feeling that their career/professional life is more fulfilling to them than the idea of raising a child. The same holds true when child-rearing is compared to building a life with a romantic partner (43% of respondents find the latter more fulfilling), traveling (36%), volunteer work (35%), and pursuing further education (34%).

And a third of respondents (33%) say that caring for pets is more fulfilling to them than the idea of raising a child.

We decided to dive a little deeper into the human-pet bond to understand how Millennial women view their companion animals, especially when it comes to the subject of children.

In our survey of 400 Millennial women who don't want children, 70% of those with pets view their dog/cat as their child. In fact, 66% view caring for their pet as practice for one day having a child if they were ever to change their mind, although 72% still say they prefer the company of their canine companion or feline friend over the company of children and 69% say having a pet is easier than having a child.

So are dogs and cats the new ‘stand-in’ for children when it comes to Millennial women who have opted out of motherhood? There seems to be reason to believe as much, with 69% of survey respondents who are pet owners saying that having a pet is easier than having a child. For instance, 52% of respondents say it’s easier to find care for their pet if they need to leave their home for an extended period of time, while 49% say they can simply leave their pet home alone when they need to run errands, something that’s obviously off-the-table when it comes to a child.

Many cited other reasons for their belief that companion animals are simply easier to care for when compared to children. For one, the costs of caring for a pet are lower (according to 48% of respondents, who are certainly onto something, considering the costs of a puppy vs. a baby in every state). Caring for a pet is also less stressful, say 42% of respondents, as well as less time-consuming (39%).

But for these Millennial women, their beloved pet is far from being ‘just a dog’ or ‘just a cat.’ These companion animals truly are members of the family, and it’s easy to see why some Millennial women might view Fido or Fluffy as their genuine child...and treat them as such as well. Among survey respondents who are pet owners, 53% made a home purchase/renting decision based on whether there was enough outdoor space for their pet--not a surprise, considering a recent Harris poll found that 33% of Millennial home buying decisions were chiefly driven by the buyer’s dog (outranking marriage and kids as incentives).

Meanwhile 51% of survey respondents have bought clothing for their pet in the past and 48% have celebrated their pet’s birthday and/or bought their pet Christmas presents. Doing whatever it takes to cover their pet’s healthcare has also been a non-negotiable for 41% of survey respondents, who have opened up lines of credit or taken out loans to cover their animal’s medical expenses. And what’s travel without your four-legged friend by your side? When it comes to road trips, 36% of respondents have taken their pet along, 37% have made travel arrangements based on pet-friendly attractions, and 32% have selected a vacation rental based on whether or not it allowed pets.

It’s safe to say that for many, companion animals have become much more than mere pets. Dogs and cats have grown to be major parts of our lives, and have made a place for themselves not just in our homes but in our hearts. Birthday parties and home-buying decisions and holiday celebrations no longer are tied solely to whether or not a person has children. These traditions extend to animals as well and are clearly allowing a significant number of Millennial women the opportunity to still engage with them even if they’ve opted out of motherhood.

If there’s one thing that national birth trends are showing, it’s that more and more people, especially Millennial women, are redefining what it means to have a well-lived, fulfilling life.

While marriage, two children, and a house with a white-picket fence might’ve been the goal to aspire to for many not so long ago, it’s no longer the only goal on the table. Women have more opportunities than ever when it comes to their education and career, as well as more agency when it comes to deciding whether ideas that were societal norms for previous generations still fit into the lifestyle that best suits their own heart’s desires.

For many, motherhood simply doesn’t have a place in that equation. Instead, these women find fulfillment elsewhere: in traveling, in their career, in volunteer work, in enjoying their hobbies. And while American ideals have typically defined a family as a household with children, the truth is that ‘family’ encompasses far more than that and ultimately includes those with whom you share a loving bond: whether that be a romantic partner, or yes, a wet-nosed, tail-wagging, four-legged friend.

This online survey was administered via Pollfish and ran from July 29-July 30, 2021, with no less than 400 respondents.