Pet Ownership Stats - How Far Will Americans Go For Their Pets?

What would you give up for your pet? Read on to learn how far Americans will go to ensure their pet’s happiness and other fun pet ownership stats!

Methodology
The Quest Begins
No Turning (Green) Back!
“X” Marks the Spot
More... 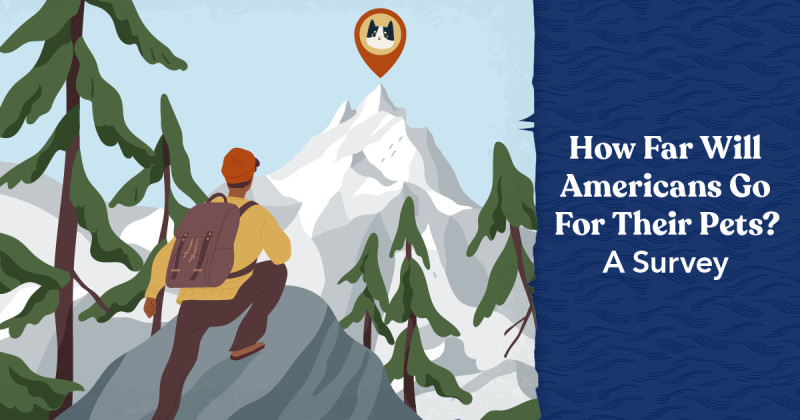 Reader, you have been given a quest! Should you choose to accept it, you will begin a journey full of danger, darkness, and a whole lot of dog hair. There will be tears and treats, pitfalls and poop patrol, muddy pawprint trails leading you to parts unknown. This journey is not for the faint of heart, but if you stay the course, you will be rewarded with the most priceless treasure: unconditional love.

While there’s no real map to becoming the perfect pet parent, we imagine it would be crowded with both obstacles and opportunities. Each day, pet parents have to make decisions with their pets in mind (Should my cat be eating that? Can we skip the walk and sleep in? Was that head shake a sign of an ear infection, or is my dog just tired of my singing?), and it’s clear why: 96% of people consider their pet a family member. At Honest Paws, we know American pawrents will go the distance for the ones they love, but pet parenting can be quite the challenge. So, are you up to it? Just how far will you go for your pet?

The team at Honest Paws surveyed 1,014 Americans to explore the lengths they’d go to for their beloved pets. We asked a range of questions about the compromises pet parents are willing to make when it comes to finances, relationships, travel, and more.

Read on to see just how much Americans love their furry, fanged, or scaly family members! 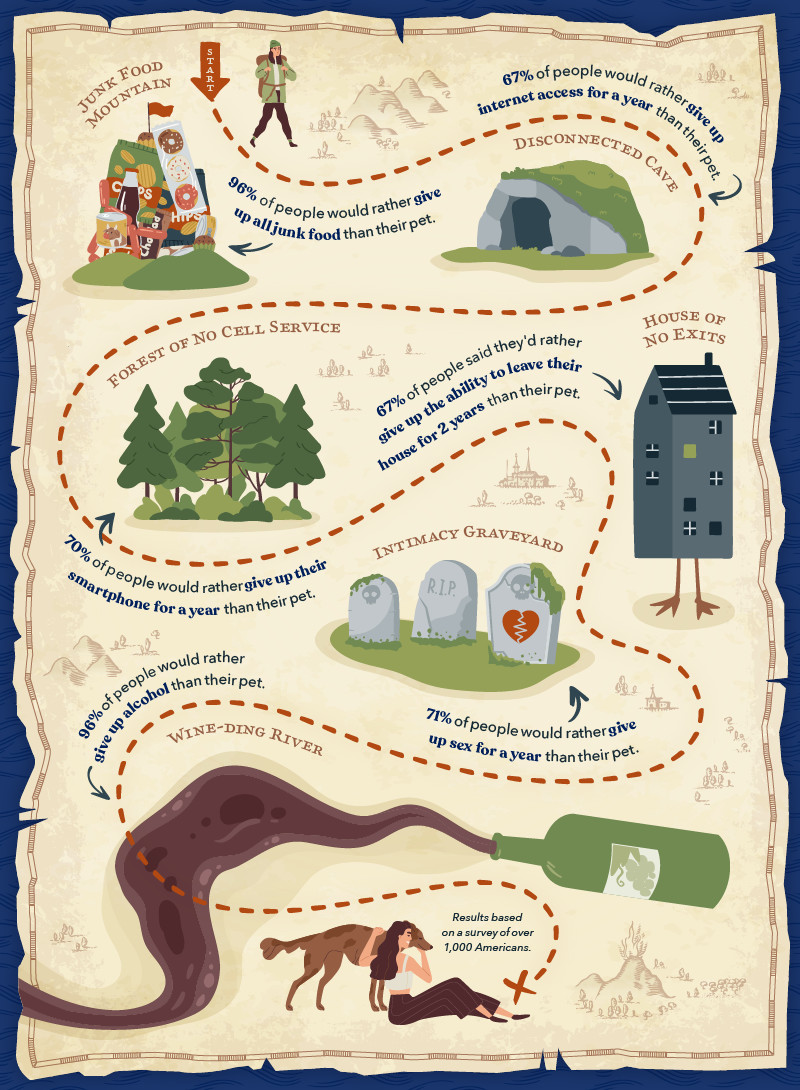 On this journey, keeping yourself and your pet on the right path may mean making sacrifices. And while for most Americans this means getting up earlier to take the dog for a walk, cleaning up accidents in the middle of the night, or forking over extra spending money to keep a pet sitter on retainer, some people may be willing to give up a few of life’s little luxuries to keep their pets healthy and happy.

But food and beverages are easier to live without than access to the wider world. While 67% of people would rather stay in their homes for two years (perhaps unsurprising after the last year), for some Americans, connecting digitally may be more important than in person. 32% of people would rather give up their pet for a year than Internet access; this number is higher for men, at 42%. A smartphone is more important than a pet for 30% of people; again, men outdo the general population—34% would choose their smartphone over their pet. Still, these folks are in the minority, as most survey participants selected the company of their pet over internet access (67%) or smartphone usage (70%).

After a year without meet-cutes and meet-ups for many of us, can pets prevail over the power of intimacy? For the majority of survey participants, slobbery kisses from a furry friend are more important than those from a partner—71% of people would rather give up sex for a year than their pet. Meow!

But not everyone is willing to make as many sacrifices, and for some survey participants, this challenge is mission im-paws-ible. 37% of men would rather give up their pet than sex. 35% of Gen-Z respondents wouldn’t give up the ability to leave their house for two years in order to keep their pet. 30% of millennials would hold onto their smartphone instead of their pet. 23% of women could live without their pets, but not without Internet access. Cue the sad puppy-dog eyes.

No Turning (Green) Back! 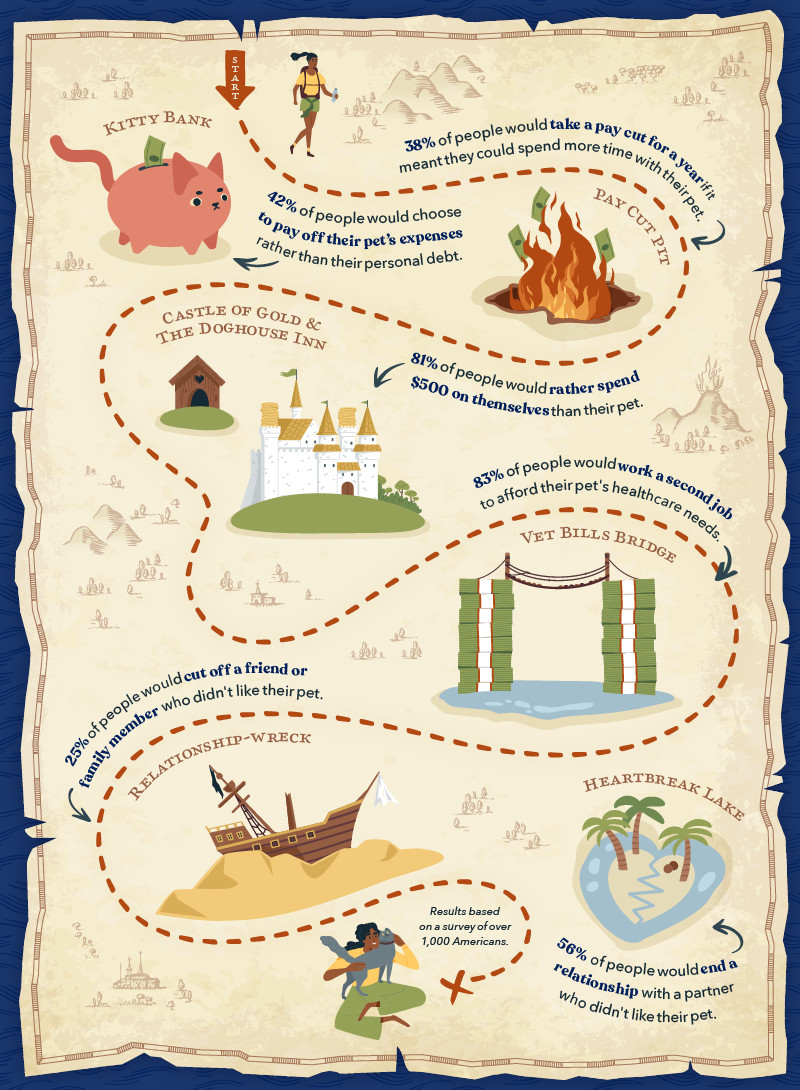 While it’s easy to invest love and attention into our pets, pet parenting can be a financial minefield with little room for missteps. Sure, Americans may be willing to say goodbye to junk food, alcohol, and even sex for their pets, but are money matters a different story?

42% of people would pay off their pet’s expenses before their own personal debt. This number is even higher among Baby Boomers—52% of adults aged 55 and older would put their pet’s expenses before their own. 84% of people would pony up the money for pet therapy if needed, and 32% said there is no limit to what they’d pay in veterinary fees to save their pet’s life. It doesn’t stop there! 86% of people would incur moving costs if they needed to relocate for their pet, and 56% would take on higher rental costs for a more pet-friendly home. For some Americans, time is money; 38% of people would take a pay cut to spend more time at home with their pets. Gen-X respondents are even more likely to take a pay cut for more quality time with their furry friends at 46%. And finally, a whopping 83% of Americans would take on a second job to afford their pet’s healthcare needs.

All of that investment can come at a cost to relationships, but many Americans say “so be it.” 56% of people would end a relationship with someone who did not like their pet; this number is even higher for women, at 64%. Another 30% of women would even end a relationship with someone their pet didn’t like! And while romantic relationships may be easier to sever than those with family and friends, some are still willing to choose a furry companion over their pals and parents—25% of people would cut off a friend or family member who didn’t like their pet. Man’s best friend may be man’s only friend.

We know that American pet owners are willing to go to the ends of the earth for their pets, but with Honest Paws, pet parenting doesn’t have to be such a challenge. Explore their selection of mobility products so you and your best friend can spend less time nursing tired joints and more time treasure hunting!