Save 20% on our Brand NEW Dry SHAMPOO for pets

Can Dogs Have Autism? Symptoms + How to Manage Autism in Dogs

An overview of whether dogs can have autism, symptoms of a pup on the spectrum, and how pet owners can manage them, plus the future of dog autism research.

Autism is no longer an entirely cryptic condition in humans. It’s quite common. One in 54 children is on the spectrum,  according to the CDC, a ratio that’s nearly doubled in the past decade from just one in 110 children. Fortunately, our medical communities have developed a clearer view of what symptoms of autism look like, which has helped increase awareness.

But what would happen if we had nil to slim research on autism? We certainly wouldn’t have as strong of an understanding of how our loved ones and even strangers on the spectrum view our world differently. And that’s precisely the case when it comes to our furry companions today.

More research is needed for vets to accept autism in dogs as a diagnosable medical condition. This means the answer to “can dogs have autism?” isn’t so clear-cut. Here, we’re providing a quick overview of dog autism research to date, symptoms of autism in dogs to watch for, how to manage them, and how to support your pup’s overall wellness. 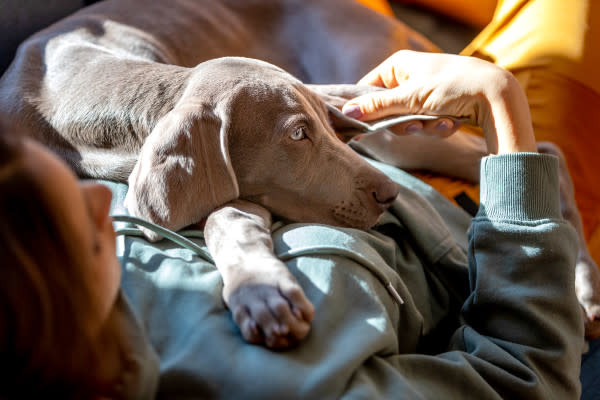 In humans, autism is a neurodevelopmental disorder that impacts how a person communicates with others or interacts with the world, sometimes making it difficult to cope with everyday tasks or social situations. Generally, there are two criteria for humans to be on the spectrum and those are:

Heightened sensitivity to everyday stimuli like lights and noise can also be a side effect of autism in humans. The severity of these side effects varies person by person, which is why it's also called autism spectrum disorder, and people with autism are considered on the “spectrum.”

How does this translate to dogs? Well, an understanding of autism in humans is a baseline for deducing whether autism exists in dogs. And there are some indications that it might indeed, given some dogs exhibit these same symptoms of autism seen in humans. Dog autism researchers refer to these as canine dysfunctional behavior.

Can Dogs be Diagnosed with Autism and How? 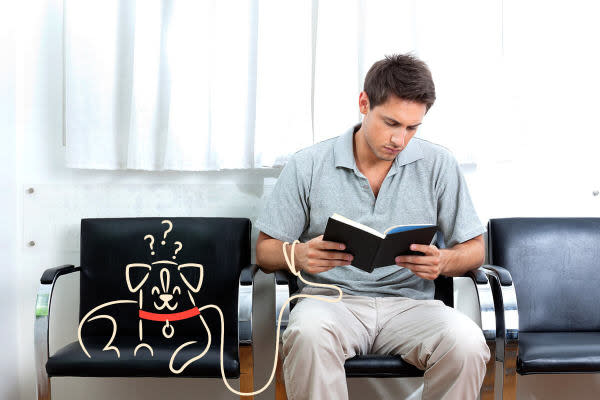 Currently, dogs are not medically diagnosed with autism because to date, dog autism research has drawn no conclusive evidence that autism exists in dogs. Rather, there is evidence that dogs can exhibit autism-like behaviors, similar to the two autism criteria in humans: impaired social interactions and repetitive behaviors and/or obsessive interests.

These symptoms have been explored as early as the 1960s, with vets performing behavioral tests to deduce whether or not a dog has canine dysfunctional behaviors. For more perspective, one of the most regarded studies of autism in dogs honed in on tail-chasing behaviors in Bull Terriers, considering this as repetitive behavior and/or obsessive interests. In observing the behaviors of Bull Terriers who obsessively chased their tails versus Bull Terriers who did not, those who chased their tails exhibited other autism-like behaviors versus those who did not chase their tails, including unprompted aggressions and detached emotional states.

Of course, these behaviors can stem from many causes. This is why it’s important to understand what causes autism in dogs.

What Causes Autism in Dogs?

The unfortunate truth is we don’t know the cause of autism in dogs because more research is needed. So for now, dog autism is considered an idiopathic condition, meaning we don’t know the cause. Canine dysfunctional behavior, however, has been deemed a congenital condition, meaning we’ve deduced that dogs who exhibit autism-like behaviors are usually born with these behaviors.

What Are Dog Autism Symptoms? 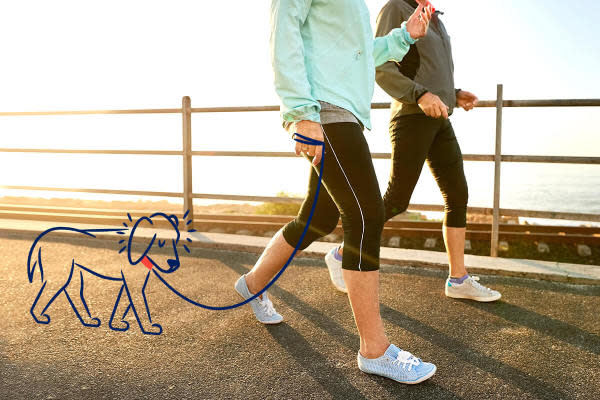 Most dog autism symptoms are believed to be grounded in the same criteria of autism in humans: impaired social interactions and repetitive behaviors and/or obsessive interests. So, what does autism in dogs potentially look like? Consider the following signs.

For most dogs, experiencing a new environment like a car ride or trip to the dog park is exciting. For dogs with autism, adapting to a new environment or breaking from routine might conjure up intense feelings of anxiety or nervousness that can sometimes turn into aggression, including toward new people or other pets.

Of course, it could be the case that your dog is simply shy or a more reserved breed. However, if your pup is of a friendly breed and exhibits this behavior, it might be cause for concern.

Reserved breed or not, dogs are pack animals at heart and usually want to interact with other humans and animals. They’re naturally social and appreciate the attention from their owners. If your dog appears uninterested in you or others, possibly even entering into trance-like states, this could be another sign of canine dysfunction behavior and potentially autism.

As pet owners, we know a wagging tail means Fido is happy and those puppy eyes mean they’re begging and whining can be a greeting. But, as it’s a disorder that affects the nervous system, dogs with autism might lack the neurons to express these everyday feelings, leaving them appearing distracted, confused, or even aggressive in the face of calming or disciplinary gestures from owners. If your pup provides responses that don’t match up with your gestures, it might be cause for concern.

Every dog has some routine, perhaps pawing at you for a walk every day after lunch or even dropping a bone on your lap every time you sit on the couch. But it’s when repetition becomes non-sensible that pet owners might want to perk up their own ears. For instance, a dog who’s walking in circles, grinding their teeth, obsessively tail chasing, or organizing their toys diligently might be exhibiting signs of canine dysfunction behavior and potentially dog autism.

Sure, some stimulants are simply too much for dogs, including fireworks or thunderstorms. But others are considered universally feel-good to Fido, such as petting or when we speak to our pups excitedly. Dogs with autism, however, might register these feel-good gestures or simple stimulations to the extreme, such as yelping when you scratch behind their ears or retreating under the bed every time you turn on a light and change their environment. Pay attention if this is the case in your pup.

Lack of Energy and Enthusiasm

Not every dog breed is as playful as a Golden, but most all canines express some measure of enthusiasm. This might not be the case with dogs with autism because they experience our world differently, with even the smallest environmental changes sending them into tailspins. In turn, they might become more stressed and lethargic because of it.

Of course, there are several reasons dogs might be tired, but especially if high-energy breeds exhibit signs of reduced physical activity, it might be time to call in a vet — they’re any pet owners’ starting point to understanding how to manage a dog with autism. 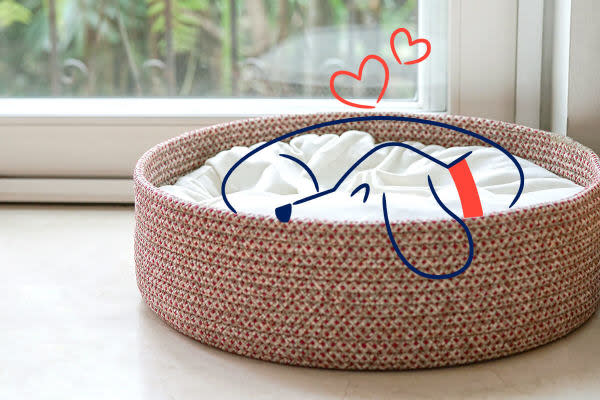 If your dog exhibits some of the above symptoms, it might be hitting you, “I think my dog has autism.” The good thing in recognizing your dog might have autism means you can start managing your dog’s symptoms, beginning by visiting your vet to identify what triggers your dog’s atypical behaviors and putting in place a plan to adjust your dog’s environment accordingly.

Once you and your vet have identified your dog’s triggers, whether it’s overstimulation to touch, sights, sounds, or even stress-inducing social situations, you can adjust your habits to encourage what brings them happiness.

For instance, a pup who becomes anxious around lots of animals or people might need to avoid the dog park and instead opt for a quiet neighborhood walk for exercise. If Fido doesn’t want his ears pet, owners should respect this. By removing your dog’s biggest stressors, you’re creating an environment that prioritizes their safety, security, and overall well-being.

The truth is the world is a big place, and we can’t control all of it for our dogs. Even unavoidable parts of our everyday routines might overstimulate a dog with autism, like turning on the shower or opening the door. For this reason, create a dedicated space in your home for your dog to feel safe and secure. This could be a dog bed, a kennel, or even a cozy corner in a closet that they can retreat to and know there’s nothing to disrupt them. It’s about creating a space they can rely on as being safe.

Just as physical exercise can reduce stress and anxiety in humans, dogs too can benefit from regular physical movement. And since dogs with autism would have no control over their mental state, it’s our job as pet owners to ensure they’re in the best physical shape. That also includes administering a well-balanced diet and caring for their digestive health.

As pet owners, it’s our job to discipline our pets when necessary. In the case of dogs with autism, they might not be able to decipher your disciplinary action as just that — discipline — and they might respond with aggression or other atypical behaviors.

For this reason, consider calling on a trainer or behavioral therapist. They can help you practice positive reinforcement to ensure you’re able to effectively communicate how your dog should behave and that you’re considering how a dog interprets the way you communicate.

There are many natural remedies to reduce stress in pets, including CBD oil for dogs, and also tools like pressure wraps that can offset anxiety. To ensure your dog is getting the best treatment necessary, visit your vet for a professional opinion on whether medication might help quell your dog’s canine dysfunction behavior. After all, every dog is different and so, too, can be their autism side effects and symptoms.

What To Do If You See Dog Autism Symptoms

If you see your dog exhibiting signs of autism, contact your vet first and foremost. This will help you deduce whether these symptoms of autism in your dog aren’t being confused with another condition such as anxiety disorder or canine compulsive disorder. Having a professional opinion can also help you chart a path of how to support your dog’s well-being to the fullest, whether they have autism or not.

Autism in Dogs: A Final Thought

Diagnosing, treating, and managing autism in dogs is entirely dependent on the future of dog autism research. Much like how autism in humans has been studied, the more we know, the better we can support our loved ones through their condition and also understand them. Above all, pet owners should approach their pups with compassion and, bottom line, love our dogs just as we do other humans— flaws and all.

This article is brought to you by Honest paws, the leading provider of dog CBD treats, hemp oil for cats, and dog CBD oil. With over 100,000 happy customers, there's a reason why Honest Paws is the #1 Pet CBD brand today!

Katelyn Son is a holistic pet wellness expert and the Assistant Blog Manager for Honest Paws, a company that specializes in CBD for dogs and cats. Not only does she have 3 furbabies of her own, but she also fosters dogs and helps them find their perfect furever home. Katelyn is passionate about helping pet parents find holistic solutions for their furry companions.